Armenia and Russia’s Quests in Surabaya. What are those?

The Mayor of Surabaya Tri Rismaharini welcomed two ambassadors in a day, from the Republic of Armenia, Dziunik Aghajanian and from Russia, Lyudmila Vorobieva. They visited the Mayor’s office on Thursday (7/2).

The Ambassadress of Republic of Armenia for Indonesia visited the Mayor earlier in the day. She expressed her want to find the traces of the Armenians or buildings which are related to the Armenians in Surabaya. 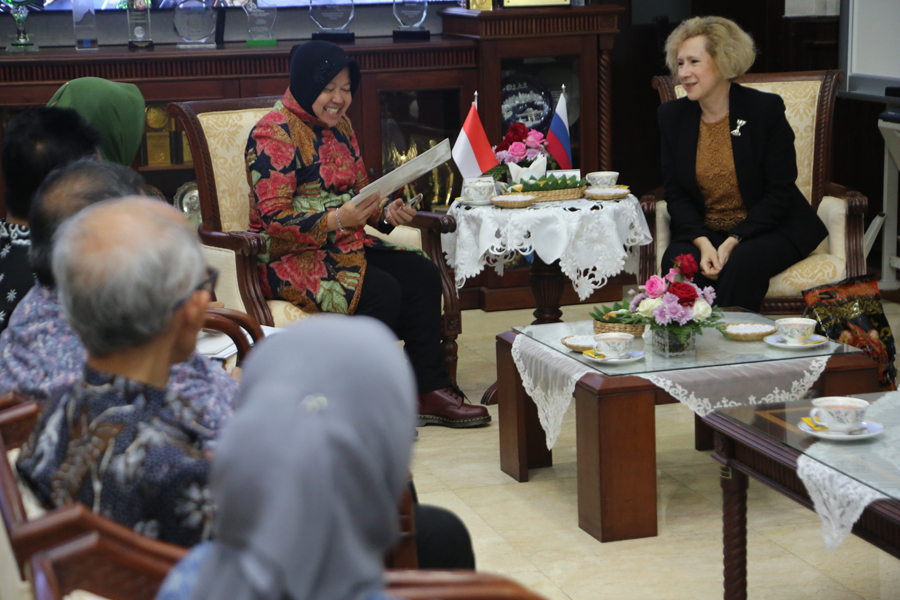 Dziunik said that around 300 years ago there was an Armenian community that lived in Surabaya and most of them were traders or businessmen. She also heard the information from the historians in Armenia that there is a church built by the Armenians in Surabaya, but no one knows its exact location. “We want to seek for it, whether it has been demolished or turned into another facility. We want to know and see it”, said Dziunik when she met the Mayor.

The Mayor of Surabaya explained the full history about Sarkies brothers in Surabaya. She said that the Sarkies brothers once lived in a house that now become Tunjungan Plaza 5. Toko NAM, the historical store back then, owned by the Sarkies brothers and they also built a hotel located across the street which now known as Majapahit Hotel. “The entrance of Toko NAM can be seen until now and it became a cultural heritage in Surabaya”, said the Mayor while she drew the position of the residence of the Sarkies brothers and also the Majapahit Hotel. Beside discussing about the traces of Armenians in Surabaya, the ambassadress also offered the possibility of sister city with one of the cities in Armenia. She was ready to facilitate the possibility of this cooperation. The Mayor welcomed the offer with both arms open, as long as it gained benefits for Surabaya.

Couple hours later, the Ambassadress of Russia for Indonesia, Lyudmila Vorobieva, arrived in the City Hall and welcomed to the Mayor’s office. She also expressed her want to trace the tracks from the Russians in Surabaya. She stated that she wanted to see the Submarine Monument which was produced by Soviet Union or now known as Russia. She was curious whether there are still some Russian inscriptions in it. She also said that based on the information that she had, there was a building used as consulate general of Russia in Jalan Sumatera, Surabaya. However, this building had been closed since 1990 and she heard that it still standing until now. “I want to check directly whether it still there or not”, said Lyudmila.

The ambassadress also offered the possibility of sister city between Surabaya with Sankt-Peterburg, because this city is the second biggest city like Surabaya and a port city. Sank-Peterburg already put an interest in cooperating with Surabaya. The Mayor gave positive signal for this offer as long as it is beneficial for Surabaya.

The ambassadress of Russia also delivered an invitation from Sankt-Peteburg for the Mayor of Surabaya. She was invited to be one of the guests of the big forum that will be held at the end of March.